In May 2002 we had both been laid off at our jobs, so we decided to have faith that the future would take care of itself and take that trip north that we had always planned to do.

I call it a strange trip because it started hot and sunny at 95 degrees, and the further north we went the colder it got until the temperature was in the 30s. Throw in dramatic scenery changes ranging from sublime to hellish, drought and then snow, a plague of locusts, a car accident narrow miss, and the entire trip was practically surreal.

I used Picasa to enhance all the photos from this trip. Many of the photos had been taken on cloudy days plus the photos seemed a little faded. I used auto contrast, tuning, sharpen, and saturation to brighten them up a bit, and my favorite museum matte framing.

Since we were going to be driving so far north, I packed our suitcases with everything from sunblock and shorts to winter coats, gloves and hiking boots. We started by driving west from Denver along the very scenic I-70 and then north to our first stop, Dinosaur National Monument, located on the border between Utah and Colorado.

The weather here was not just warm, the sun was beating down and the afternoon was shorts, caps and don’t-go-anywhere-without-a-water-bottle hot.

The monument is large, with over 800 digging sites searching for dinosaur fossils. There is a Quarry Visitor Center built over one of the most prolific fossil sites. It allows you to see what the fossils look like as they’re uncovering them. It was really interesting to see how twisted the bones are when they’re found and how carefully they are removed. And of course, the air conditioning felt great.

The entire area is very scenic and has visibility for miles. This is Green River Canyon in the monument area:

This is a nearby valley: 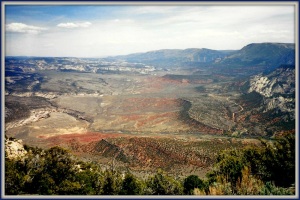 The next section is close to where we ran into the great locust plague. There were so many grasshoppers on the road that we could hear them crunch under the tires even with the air conditioning on. The walking paths in some areas were covered too. Nasty! Fortunately we drove out of that area and we didn’t see them anywhere else.

There are fascinating petroglyphs throughout the park. I heightened the contrast on this photo so the drawings would be easier to see:

Next we headed northwest to Flaming Gorge Dam.